Mentoring: Securing a healthy feedback culture in a modern organization

Flat hierarchies, a more democratic work culture and autonomous team organization are blessings for a new generation of knowledge workers. But the extinction of hierarchy layers can cause a leadership vacuum and a consequent lack of feedback. Isn’t it nice working for a company that relies on flat hierarchies? There are autonomous task
forces instead of isolated divisions reporting to higher tiers and await confirmation for every
action. You get to decide more, accomplish more, learn more and you get to work more freely. In this
land of milk and honey, there’s also a menace lurking which only takes noticeable effect in the long
run: you might be left without valuable feedback for too long.

Many organizations, especially small and medium enterprises operating in the huge software and web
environment, claim to be organized in a lean and agile way, with flat hierarchies. So do we. Over
the last decade or so, this enabled a new approach to working and a new mindset in young, talented
knowledge workers regarding how they want to structure their life and work.

An open, mostly hierarchy-free company organization that allows for flexible teams to work on
problems autonomously can support these people and prompt great outcomes in less time compared to
traditional team or department structures. No big news, still worth mentioning for what is to
follow.

Securing the pillars of the company.

While this is certainly a development to be happy about, since more responsibility fosters
self-driven knowledge building, it may — but must not necessarily — be accompanied by some drawbacks
regarding professional feedback by who used to be your product manager, department head or whoever
let you know about the quality of what you produced. Or put differently: it’s vital to receive
regular and prompt assessment of the way you produce results because it helps you identify the tasks
worth addressing to improve personally and professionally.

Even the most self-aware person cannot assume a position other than their own, which will always
leave them not recognizing all of their shortcomings…or maybe their potential.

Sure, there’s your colleagues and team mates. But, being stuck in a task together, you seldomly talk
openly to them about what really causes a period of stagnation, or allow them to be critical to the
point where they identify your weaknesses in a way which makes you want to work on them. At least
not in the course of discussing why an overdue feature cannot be shipped yet — these situations
simply don’t leave enough room for that. Criticism from your peers in these stressful situations is
mostly perceived as an attack and causes the opposite of what it is intended to.

The simple way around this is to create a setup in which critical exchange on work-related topics is
wilfully expected.

In our opinion this needs to exceed having everyone heard and encourage them to express their
opinion freely. I mean, we do involve each and everyone in developing our company and everyone can
easily take a strategic topic and make it their own, consequently having an impact on our company
culture. Just as everybody is expected to speak openly in meetings without being shut up by anyone
who’s more experienced. But that’s just the company-wide pillar of supporting an open feedback
culture. The other one is the individual layer underpinning everything.

No need for a leader to tell you you can do better.

At Railslove we’re organized in task forces that work on projects autonomously. We once started with
three co-founders and executives ten years ago, who were actively involved in projects, writing code
together with the then smaller team and thus being able to throw feedback around at all times. Two
of them have now retreated or partly shifted focus to other projects, leaving us with one full-time
CEO, Tim, who takes care of filling the sales funnel while handling loads of other organizational
stuff — and gave up most of the coding. This slowly led us to what a colleague once called a
Leadership Vacuum. Okay, but what does that actually mean?

Leadership Vacuum describes a situation where employees are in danger of experiencing a lack of
systematic feedback and targeted facilitation of personal and professional skills that was
traditionally provided by their “superiors”.

This vacuum built up gradually but at one point we became aware of a change in feedback culture that
could potentially do harm, not only to each and everyone’s individual progress but, in the long run,
also to the company, for the above mentioned reasons. We had to do something about it.

As Tim knew he was not the only one worthy and able of giving valuable feedback, we tried building
an active, mututal feedback culture to make up for missing back-channelling as found in traditional
organizations. In the beginning I indicated that company culture is changing and while workers are
more independent, they also need to develop all new skills — partly assuming responsibilities that
were once a boss-thing belongs to these skills. So we clearly communicated the following:

As with thousands of other companies, we are a mix of some experienced seniors and quite a few
juniors, most of which are developers but also a bunch of designers, a small sales team, an even
smaller marketing team, a couple of students. And all of us with lots of interests, proficiency and
more or less on-the-job-experience. Plus — most importantly — very different personal traits and
experiences that shape our characters and abilities to cope with different situations. A pool of
knowledge and advice that’s waiting to be tapped.

Why not go for a tandem model to let knowledge and advice flow? That’s how we started our internal
mentoring program.

The way feedback can happen at work heavily differs. There’s nice feedback burgers, there’s plain
criticism and sometimes there’s protectionist whitewashing. All of these can have positive effects
if applied purposely and will do harm if absent completely. Although there’s always room for
improvement regarding soft skills (like giving feedback in a sensitive way), it’s most important
that feedback is actually perceived as providing valuable information. 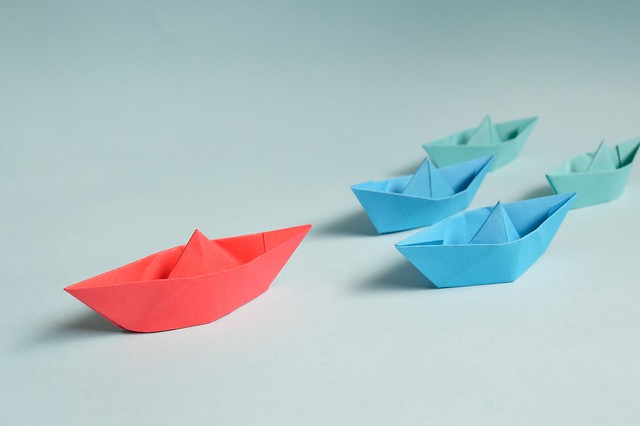 Mentoring is not about forcing feedback upon someone, it’s about strong relationships and valuable feedback.

In the old days, a higher-tier person would often force their “feedback” on people, with a lot of it
still sticking and having people change accordingly — if not always voluntarily and also not always
for the better.

Today, for us mostly unrestricted knowledge workers, change and progress need to come
intrinsically. We are free in how we work — but regular feedback doesn’t come for free anymore.

To keep organizational effort as low as possible, we just went ahead and created a Dropbox Paper doc
where everyone was asked to assign themselves to be mentor and mentee of someone. Regardless of
position and experience, there’s no way around being mentored by someone. Ever since, people meet
for a morning coffee or breakfast, for a drink after work or just retreat to a quiet place in the
office to talk — roughly once a month for whatever time it takes.

The mentoring model provides a great tool for personal improvement and strengthens relationships as
well as provides extended insights into the company for everyone. You don’t necessarily tell your
mentor about why you are struggling to build a date picker or shipping profiles but about how you
feel at work or personally and how this could be improved. We encourage everyone to be as open as
possible as long as they feel comfortable.

This really simple method improves relationships between coworkers that mentor each other but also
shows all employees in your company that really everyone has the need to talk about certain things.
If advice consists of a specific solution to a technical problem, self-improvement methods or just a
tap on the shoulder and some kind words…people strengthen each other in multiple ways.

Noone is too cool to be a mentee. Period. And if they think so, they are dead wrong. Go ahead and
mentor your way out of the feedback desert.

If you want to find out more about types and effects of mentoring we recommend the following
articles and podcasts: